The Top Gamer Bars in Australia 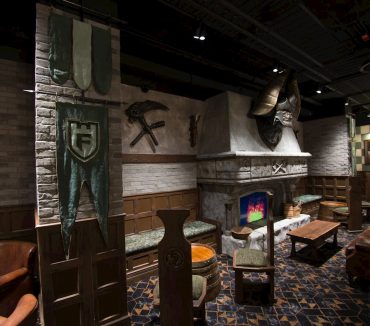 With geek culture rightfully breaking into the mainstream, nerd culture is also making an impact on the bustling nightlife around Australia. Nerdy bars have sprung up all throughout the country, enthralling their patrons with arcade games, pinball machines, and mouth-watering food and beverage lists.

Whether you’re travelling or looking for some geeky fun in your home town, here are seven popular bars that are perfect for those who appreciate the nerdier things in life.

Featuring a cleverly combined bar, diner and machine-packed arcade, it’s easy to see why Brisbane’s Netherworld remains an ever-popular destination for nerds out on the town.

Netherworld’s arcade features a collection of 25 retro and modern gaming machines and 15 pinball machines, all of which cost just $1 to play. There is also a great selection of free-to-play classic consoles and over 100 American and Euro-style board game classics tabletop strategy fanatics.

If you’re gaming on an empty stomach, Netherworld’s Hellmouth Diner boasts a broad menu spotlighting fare from around the world, while the bar employs 24 taps pouring local beer, cider and mixed elixirs. 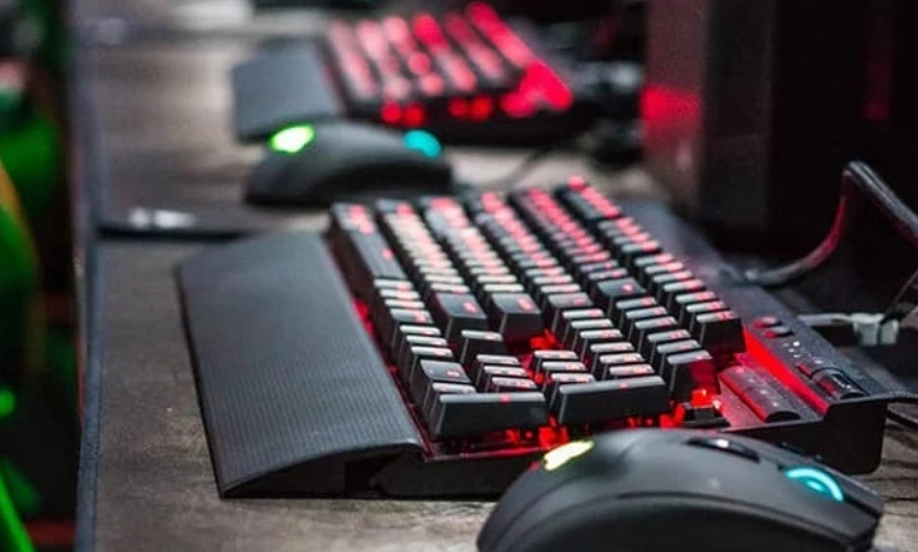 With 16 high-end gaming PCs, current gen consoles, retro arcade machines, and a bunch of board game favourites, there’s no doubt that Checkpoint esports Arcade & Bar is the hub for gaming on the Gold Coast. If events are more your style, weekly esports tournaments and generous function packages provide the perfect excuses to get your gaming-mad mates together for a weekend to remember.

Even if you’re wanting to sit back from the frenetic action and enjoy one of the gaming-themed cocktails on offer at the fully-licensed bar, Checkpoint live streams esports on Twitch and a variety of major international sporting events on a projector and big screen TVs to keep nourishing you with all the gaming goodness you could ever dream of. 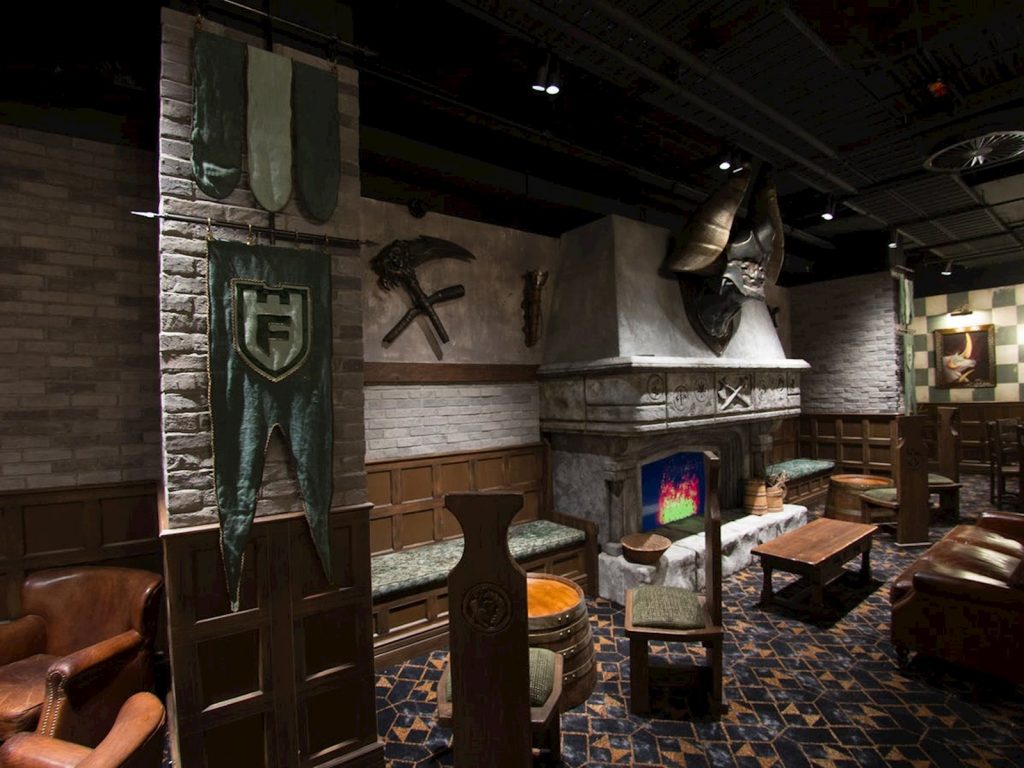 One of the most exciting additions to come in years to gaming venues in Australia is the aptly named Fortress Melbourne. This place truly is a fortress for the passionate gamer. Featuring an ESPORTS ARENA (capitalised because it deserves it!) , dedicated tabletop areas  – complete with a digital fireplace – bars, arcades, gaming consoles and so much more, you’ll spend hours exploring this venue. And that’s before you even sit down for food and drink.

For the Aussie readers, imagine an RSL club done for gamers. The expansive menu includes video game themed treats like Dragons Wings and Heroic Eggplant Parma. While if you’re looking to quench your thirst, the Sports Bar features a great selection of cocktails, beers and ciders.

Fortress also offers a huge variety of regular events. Tavern Trivia is held every Monday night, and you better book ahead because it sells out on the regular. Fortress also hosts movie nights in the esports arena, board game nights and even D&D evenings (superbly paired with beer!)

This is a venue you absolutely can’t miss if you’re visiting Melbourne. And if you’re a local, well, you’re going to need to free up some serious time on your weekly calendar. 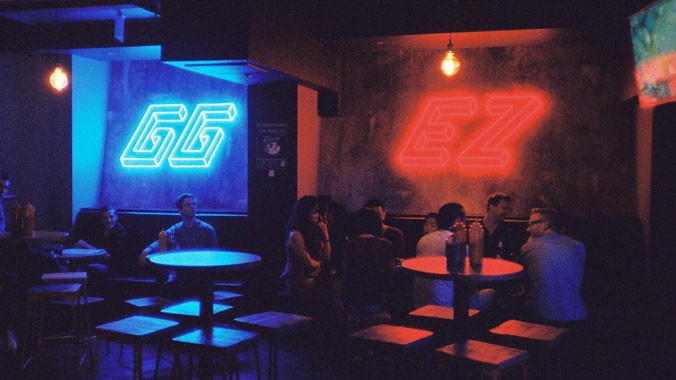 Australia’s first ever dedicated esports bar, this is not the pace you’ll come to play games. GGEZ is where you’ll come to watch games – the world’s most exciting esports tournaments live. Think of your average sports bar, but pimped up for esports content. In this neon soaked venue in downtown Melbourne, this is where the local esports and gaming crowd congregate to network, chat, or just blow off steam from a hard week at work.

GGEZ has one of the best gaming themed drinks menu in the country. Try from a variety of hand picked craft beers, bubble cups, Soju or cocktails and you’ll be leaving the venue feeling *much* better than you left it.

While you’re there, make sure you get a photo in front of their iconic neon signage, a must for every discerning gamer’s Instagram. 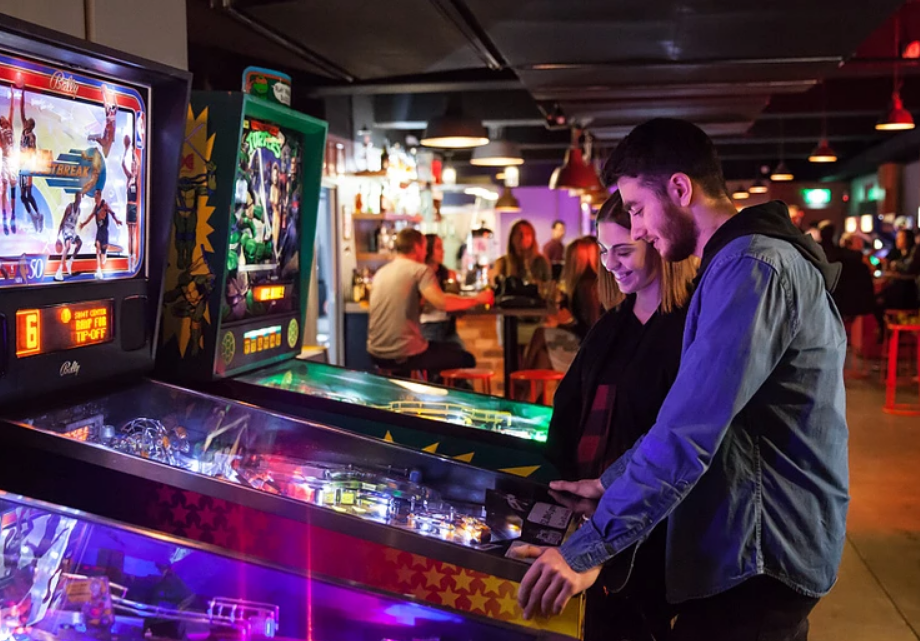 Bartronica is a Melbourne staple effortlessly combining quality arcade machines and console games with some of the greatest cocktails and craft beer going around. On weekends you can find the place buzzing as people mash controller buttons and laugh, taking brief respites to quickly sip from a perilously placed beer nearby.

All of the arcade classics are on show in the tightly-packed basement bar, including Daytona, Time Crisis 2, Mortal Kombat, and the regularly rotated console games present a great opportunity to play with strangers (aka future friends).

If you’re on the hunt for a challenger, Bartronica’s Facebook page is regularly updated with upcoming video game tournaments. These tournaments, including Super Smash Brothers, Street Fighter, Mario Kart 64 and Goldeneye, mark the perfect opportunity to prove to your mates you’re just as good as you were 15 years ago – maybe even better. 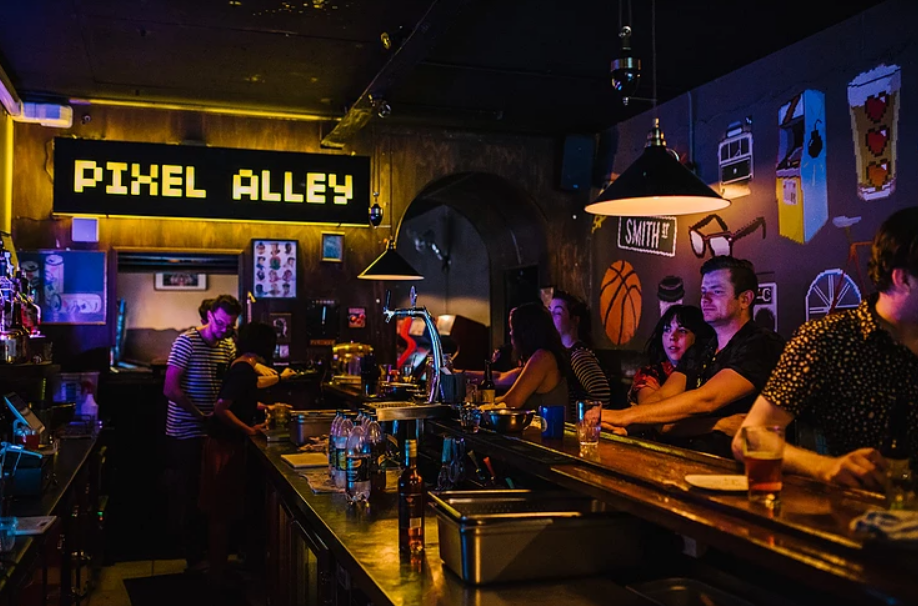 Its immediately apparent who Pixel Alley are wanting to entertain with the pixel art mural of 1980s retro icons adorning the back wall. The games on offer are also decidedly retro and include Donkey Kong and Pac-Man alongside more modern games like Big Buck Hunter and House of the Dead.

The beer on-tap also earns punters a $1 game token, but if you’re looking for something a little more special the game-inspired cocktails and craft beer selection are fantastic. If you’re after more traditional games, or just a change of scenery, Mr Wow’s Emporium up the stairs offers bocce and snooker in a similarly kitschy setting. 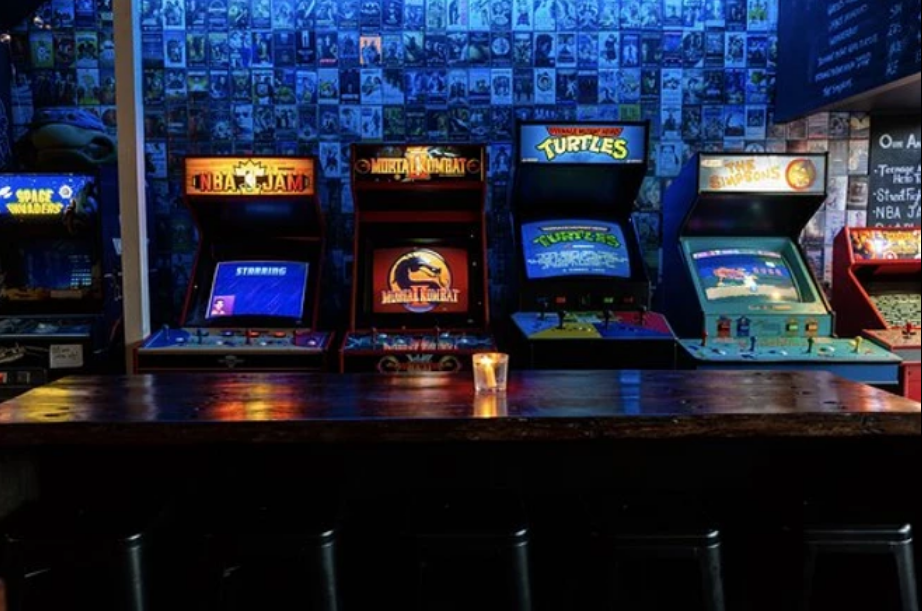 Retro games are the name of the game at 1989 Arcade Bar, where monthly game tournaments will pit contenders against each other in classic arcade and console games from the monster selection on offer. The retro theme is enhanced even further with the inclusion of a feature wall made up of 500 real VHS cases, encouraging home movie night nostalgia from the 80s and 90s.

High scores are meant to be beaten, and for the whizzes who trump a reigning score at 1989 Arcade Bar will get a free winners coffee (although it just resembles a regular coffee). If the glory and caffeine isn’t enough to satiate you, 1989 Arcade Bar are open for breakfast, brunch and lunch seven days a week. 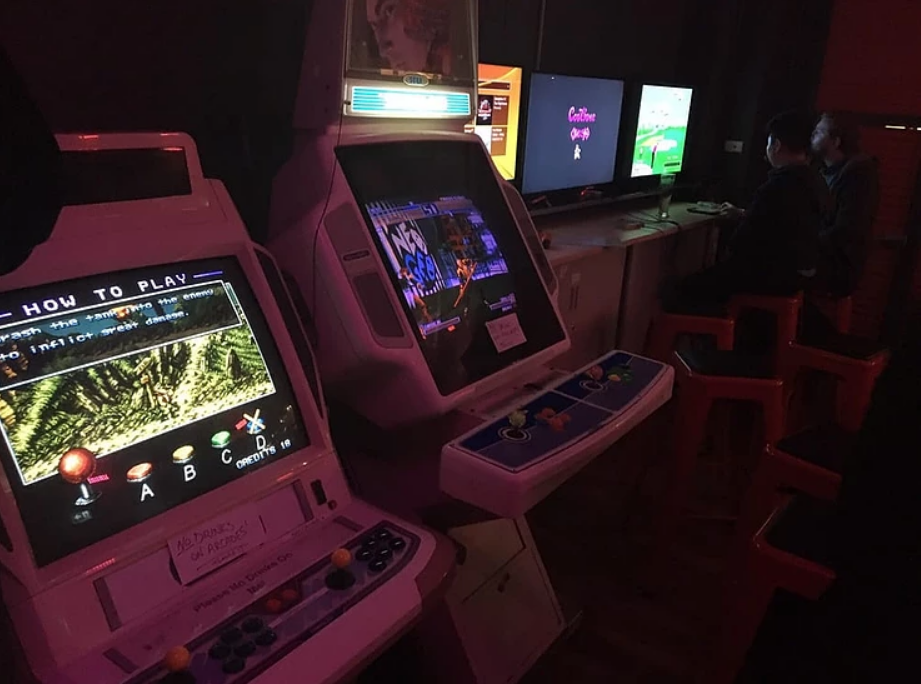 It’s obvious that Spawn Point was created by gamers for gamers – frequent competitions complement the variety of console and cabinet games. With a capacity of just 60, Spawn Point is a cosy retreat for gamers looking to challenge other players in a unique subterranean setting.

Despite being very gamer-centric, the philosophy of the bar is to create a very casual and inclusive environment reminiscent of the late-night gaming many players fondly remember. Unlike the cordial-fuelled gaming all those years ago, the selection of spirits, cocktails, beers, wines and cider serve to create a relaxed setting for those playing social games like Guitar Hero and Super Smash Brothers. 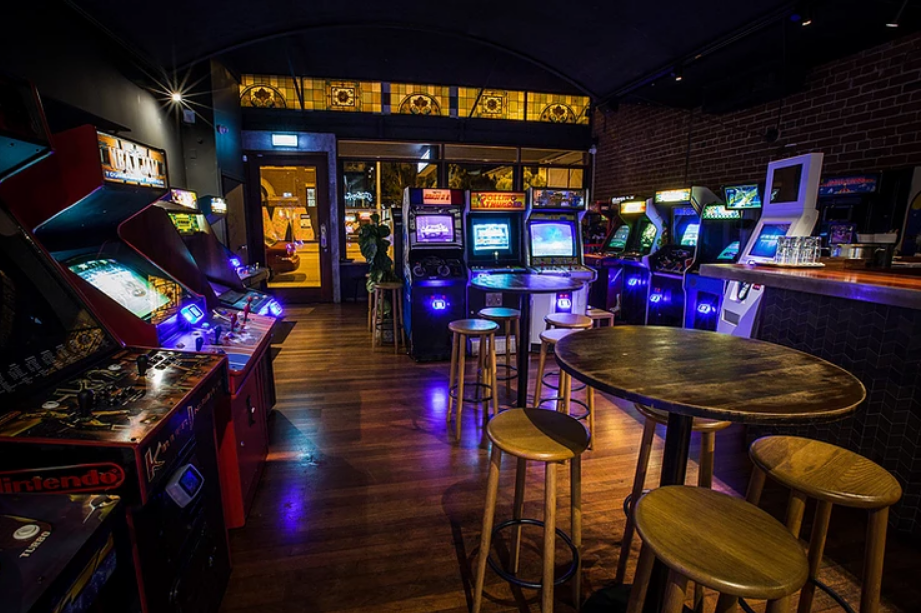 The Palace Arcade was opened as Perth’s first ever arcade bar, and despite having no nerdy bar competition, music promoter Saran Bajaj immediately filled it with 100 of his own vintage arcade games. That’s nerd dedication for you! The cabinets include rare original Donkey Kong, Space Invader and Double Dragon alongside classic games that have otherwise never been imported into Western Australia. Although you’ll pay to play on weekends, the games are completely free during the week – its retro gaming on a budget made easy (and classy!).

This Palace Arcade is no ordinary bar, though – Bajaj always intended for the Palace Arcade to be a haven for nerds who appreciate the finer things in life, so patrons have a great selection of quality cocktails, spirits and craft beer available to them to make your night out even more special.

So that’s our list! We hope you get out to your local gamer bar, and be sure to drop in when you’re in new a city. You might just discover a new arcade, or tasty burger, or quenching craft beer to enjoy. Beers + Burgers + Games = no brainer!